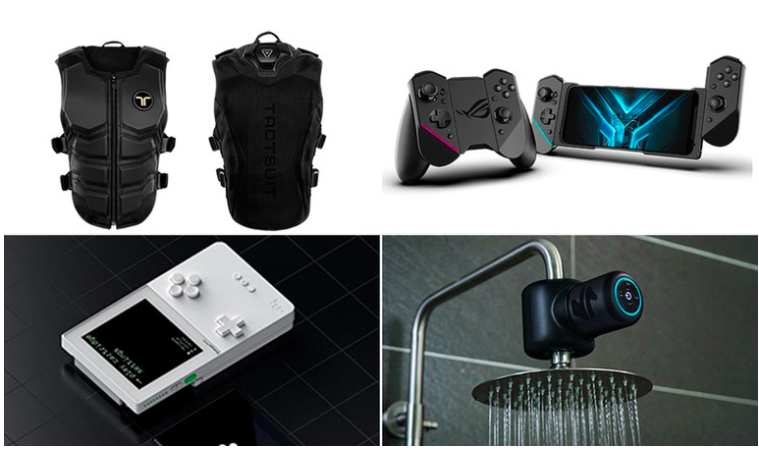 Like every year, the CES technology fair exhibits products that attract attention for their innovation and creativity. Here is a selection of useful and original gadgets for the home, and peripherals to improve the user experience when playing video games.

AerHome detects toxic gases and micro-dust (particulate matter) to prevent exposures (minor or severe) that are hazardous to health
It has been recognized with an innovation award from CES 2021. It combines environmental nano-gas sensors with artificial intelligence (AI) software to provide an app-based diagnosis of air quality in each environment. home.

Essentially, AerHome detects toxic gases and micro-dust (particulate matter) to prevent exposures (minor or severe) that are hazardous to health. You can interact with the ecosystem of connected devices, like smart speakers, for example, to give the order to clean the air conditioning, open the ventilation systems or provide emergency notifications.

It is a development of the company specialized in nanotechnology AerNos Inc., of San Diego, California, which develops gas nanosensors for specific applications to detect harmful gases in the environment.

It is a development of the Ampere brand, which has promoted this project on the Kickstarter crowdfunding platform. It is placed in the head and works with a turbine that uses the energy of tap water to charge a lithium ion battery with a capacity of 2,600 mAh. It can reproduce sound in 360 degrees, with a power of up to 85 dB in standard mode and 45 dB in battery saving mode.

The cell phone is a console, with ROG Kunai 3 Gamepad, awarded at CES 2021
Also honored with an innovation award, this gamepad provides a more immersive gaming experience. The ROG Kunai 3 is a console controller in a gamer mobile phone (the ROG Phone 3). Can be used standalone or when docked.

ROG is Asus’s hallmark for its gaming accessories and peripherals. Although it is designed for cell phones of the brand, it is possible to use it by connecting it with other devices. It can also be connected to the computer with USB-C cable.

It is modular and consists of a bracket, two controllers and a charger and the knob or handle. It has 3 positions: Handheld mode, where you connect the phone for instant action; All-in-one mode, to use the grip for a console-like experience, such as a joystick, and Mobility mode, to play anywhere with a compact gamepad. Its value is USD 147.

CES 2021: A tribute to the Game Boy, with more technology
It is a pocket console with multiple video game system, compatible with the Game Boy, Game Boy Color and Game Boy Advance game cartridge library, and even Neo Geo Pocket Color and Atari Lynx titles. Also works with cartridge adapters for other portable systems.

It is designed with a 3.5 “LCD screen with a resolution of 1600×1440, that is, it has 10 times the resolution of an original Game Boy. The screen is even made of Gorilla Glass. It has a built-in digital audio system called Nanoloop. It is a synthesizer and a sequencer, which allows you to create music too, being able to connect it to a Mac, PC or other hardware with MIDI cables. Presale is available at analogue.co for USD 199.99.

Tactsuit X40 is a wireless haptic vest that provides tactile feedback to the user when playing augmented or virtual reality (VR) content, for consoles and PC. Currently, users can enjoy more than 30 VR content that has been integrated by the SDK (software development kit) from bHaptics, the creator.

As for non-embedded content, such as movies and music, the software automatically creates haptic feedback based on real-time audio. Feedback is created by the vest’s 40 vibration motors, for more immersive experiences. The company says the vests are currently compatible with more than 50 titles on SteamVR and Oculus Quest. It has been honored with an innovation award from CES 2021, and its value is $ 499.

Charge Play Duo XBox at CES 2021
The HyperX ChargePlay Duo is an officially licensed Xbox two controller charger that is designed for the Microsoft console and is compatible with Xbox Series X / S and Xbox One wireless controllers. The product features a quick-dock design on the weighted base and LED indicators that show the charge status of each joystick. Each ChargePlay Duo also includes two 1400 mAH rechargeable battery packs.